One of the big problems on an expedition is keeping the electronic stuff charged. Even on a relatively short expedition such as mine, with the number of electronic items most people carry, charging is critical and just carrying enough batteries for the trip can result in too much weight, volume or expense.

I have a Brunton 26W folding solar panel that does an admirable job of harnessing the sun's energy and outputting power.

However, charging my Nikon D7000 battery has always been a problem as nobody seemed to produce a 12V car type charger for the EN-EL15 batteries that it (and several other cameras, including the flagship Nikon D800) uses. I had previously tried a cheapo eBay charger supposedly good for charging the batteries but I found that once charged the battery showed as being almost a throw away item. The Nikon has a system that not only shows charge level of the battery but also nominal age on a scale of 1 to 4, 1 being new and 4 being just plain worn out. After charging with the cheapo the battery would read as a 4, recharging on the genuine Nikon charger restored it to a 1 but it created doubts about how much damage was being done to the battery.

Recently, I came across a company called Hahnel. Based in Ireland, they produce a range of chargers that will charge the Nikon battery. I ordered one of their chargers called a Unipal II and received it a couple of days ago.

After charging both of my Nikon D7000's batteries and some other different sorts of batteries I can genuinely say I am impressed. The batteries all charged without problem.

The Unipal II can charge AA's, AAA's, almost all lithium ion batteries, as well as having a USB outlet allowing it to charge iPhones etc. A truly versatile charger.

And even though it has the ubiquitous "Made in China" on it, quality looks to be pretty reasonable. 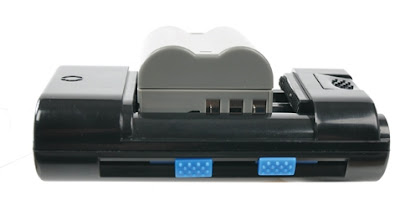 In all of East Greenland, there are only 7 settlements. They are: Kulusuk, Tasiilaq, Isertoq, Tiniteqilaq, Kuummiut, Sermiligaq and finally Ittorqqortoormiit in Scoresby Sund 600 kms to the north.
This is an indication of just how inhospitable this landscape is, the East coast is roughly 2,500 km long and it supports only a little over 3,100 people

The first 6 settlements all lie south of the Arctic Circle and total a population of 2665 as of 2010.

Tasiilaq (formerly Ammassalik or Angmagsalik) is by far the biggest settlement with 1930 people living in it.

Kulusuk (formerly Kap Dan) is where the main East Greenland airport is located and where I will enter Greenland. It is a small picturesque settlement with 286 people.

The friendly settlement of Kuummiut, has a population of 361 as of 2010

Isertoq is an isolated settlement to the South East of Ammassalik Island with a population of only 93 people.

On my last trip I visited Kulusuk, Tasiilaq, Tiniteqilaq and Kuummiut. Hopefully on this next visit I will also get to Sermiligaaq. The weather will decide...

It appears that these Eastern settlements maintain a far more traditional way of life compared to Western Greenland which has been heavily influenced by Danish culture.
Europeans arrived in the Ammassalik area only around 120 years ago. Contact was made very late due to the difficulty of navigating these waters with only a relatively small window of ice free conditions.

Compare this to the settlement of South Greenland by Eric the Red and his Viking countrymen. Eric the Red first landed in Greenland in 982 AD and by 1000 AD there were some 3,000 people living in 300 to 400 farms.